When networks interconnect, they agree to announce routes to each other utilizing the Border Gateway Protocol (BGP). This is known as "interdomain interconnection." (This is not to be confused with intradomain routing. Routing within a domain or AS network can have its own set of curiosities, it is generally conducted by a different protocol than BGP such as OSPF (open shortest path first) or RIP (resource information protocol) and can involve MPLS creating virtual circuits across domains)

A receiving network announces which destinations (which ASNs) it provides a route to, and how many hops (a.k.a. "AS path length") it takes to get there. [GAO, 2006, p. 7] . If it does not announce routes, then there is no path through that network to that particular destination. The route announcement information does not relay information about capacity or quality of service. The route announcement may include localization information (i.e., MEDS, that the network would prefer to receive traffic destined for New York City at the interconnection point closes to New York City).

Routes that are within the receiving network's domain are OnNet and generally fall under peering. A receiving network can also announce routes to destinations that can be reached through the provider interconnecting with third party networks; these are OffNet and fall under transit.

Based on the information in the routing table, the sending network will decide which route to use when sending traffic. The sending network looks in its routing table to see which networks provide a route to, for example, the destination address 192.104.54.5 and how many networks the packets have to go through. Based on that information, the router will select a route to send the packets off to, sending them off to the next hop, which will them do the same look up and make similar decisions, until the packets reach their destination.

* Note that a "Route Flap" can occur when FOO and BAR keep sending the traffic back and forth because their routing tables tell them that the other is the "best route" to the destination ASN 9.

The sending network will engage in a certain degree of filtering of possible routes, removing prefixes that for instance your customer does not actually own, configuration mistakes, or routes involved in attacks. Almost every peering policy calls on a peering partner to filter routes. An announcing network will also filter out ASNs that it does not want to announce. An AS receiving route announcements should filter out AS paths that include their own AS number, in order to avoid a route loop. [NIST 800-189 Sec. 2.2]

When BAR announces that it has a route to ASN 9 through ASN 8, it is announcing a route and a path length. In this case the path length is 2 (two AS hops). If FOO was directly interconnected with ASN 9, ASN 9 would also be announcing a route to ASN 9 with a path length of 1. Under normal circumstances, FOO will listen to both BGP announcements, compare the path lengths, and send the traffic along the route with the shortest path length. In this case, FOOS would select to send the traffic directly to ASN 9 instead of sending it through BAR.

An announcing network can manipulate AS Path Length by making it appear that a route is longer than it is. An announcing network can prepend ASNs to its announcements to extend the AS Path Length. For example, in the example above, BAR made the announcement "ASN 8 ASN 9" - that it is a two hop route to ASN 9. If it makes the announcement "ASN 8 ASN 8 ASN 9," it now makes it seem like ASN 9 is three hops away, and influences the routing decisions of the sending network. BGP Best Path Selection and Manipulation, CISCO (2014)

BAR can also announce MEDs. Basically BAR is announcing a localization preference that BAR wants traffic destined for a destination to be delivered near that destination (a.k.a. cold potato routing).

"NSFNET introduced a complexity into the Internet, which the existing network protocols could not handle. Up to the NSFNET, the Internet consisted basically of the ARPAnet, with client networks stubbed off the ARPAnet backbone. I.e., the hierarchy between so-called Autonomous Systems (AS) was linear, with no loops/meshes, with the Exterior Gateway Protocol (EGP) used for for inter-AS routing carrying the AS Number of the routing neighbor. This made it impossible to detect loops in an environment where two or more separate national backbones with multiple interconnections exist, specifically the ARPAnet and the NSFNET. I defined that I needed an additional "previous" AS Number for the inter-AS routing to allow supporting a meshed Internet with many administrations for its components. Meetings with various constituents did not get us anywhere, and I needed it quickly, rather then creating a multi-year research project. In the end, Yakov Rekhter (IBM/NSFNET) and Kirk Lougheed (Cisco) designed a superset of what I needed on three napkins alongside an IETF meeting that included not just the "previous" AS Number but all previous AS numbers that an IP network number route had encountered since its origin. This protocol was called the Border Gateway Protocol (BGP) and versions of it are in use to this day to hold the Internet together. BGP used the Transmission Control Protocol (TCP) to make itself reliable. Use of TCP as well as general "not invented here" caused great problems with the rest of the Internet community, which we somewhat ignored as we had a pressing need, and soon with NSFNET, Cisco and gated implementations at hand, the Internet community did not have much of a choice. Eventually and after long arguments, BGP got adopted by the IETF." [Braun]

"An AS is a connected group of one or more IP prefixes run by one or more network operators which has a SINGLE and CLEARLY DEFINED routing policy." IETF RFC 1930.

"An Autonomous System (AS) is a group of one or more IP prefixes run by one or more network operators that maintains a single, clearly defined routing policy. An IP prefix is a list of IP addresses that can be reached from that ISP’s network. The network operators must have an ASN to control routing within their networks and to exchange routing information with other ISPs." ARIN

"An ASN is a globally unique number used to identify an Autonomous System. An ASN enables an AS to exchange exterior routing information with neighboring ASes." ARIN

"An AS has a globally unique number (sometimes referred to as an ASN, or Autonomous System Number) associated with it; this number is used in both the exchange of exterior routing information (between neighboring ASes), and as an identifier of the AS itself." IETF RFC 1930.

In the current classless Internet (see [CIDR]), a block of class A, B, or C networks may be referred to by merely a prefix and a mask, so long as such a block of networks begins and ends on a power-of-two boundary. For example, the networks:

can be simply referred to as:

The term"prefix" as it is used here is equivalent to "CIDR block", and in simple terms may be thought of as a group of one or more networks. We use the term "network" to mean classful network, or "A, B, C network". [J. Hawkinson, T. Bates, Guidelines for Creation, Selection, and Registration of an Autonomous System, IETF RFC 1930, Sec. 3 Definitions (March 1996)] 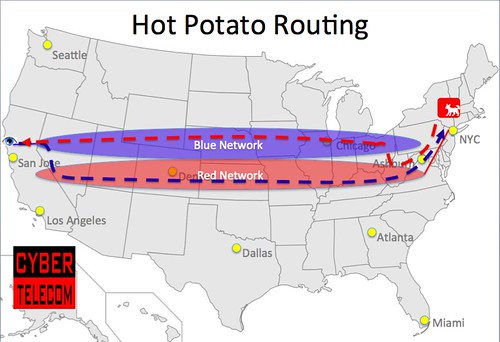 The history of "Hot Potato Routing" has its routes back to Paul Baran. "Hot Potato Routing" for Baran was not so much a part of an interconnection / settlement scheme as much as a protocol to ensure reliability and resiliency. [Roberts, Computer Science Museum p. 14 1988]

Content Delivery Networks generally engage in "Cold Potato Routing," (a.k.a. "Best Exit Routing") holding onto traffic for as long as possible and handing it off as close to the eyeballs as possible, seeking to manage quality of service and defray the transit costs of the receiving networks. [AT&T Ex Parte with Commission Pai, The Internet Interconnection Ecosystem, Slide 14, June 26, 2014 (diagraming cold potato routing).]

In order to route traffic internally, networks use 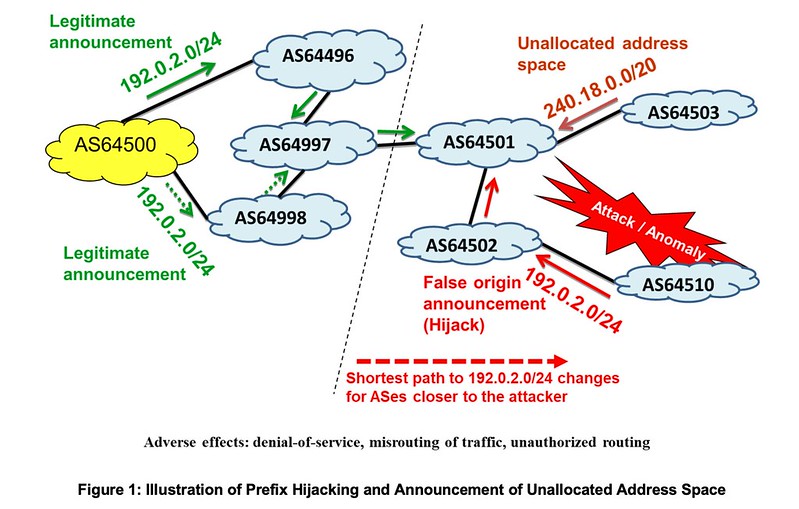 "The rules for IP route selection on the internet always prefer the most specific (i.e., longest) matching entry in a router’s FIB. When an offending AS falsely announces a more-specific prefix (than a prefix announced by an authorized AS), the longer, unauthorized prefix will be widely accepted and used to route data. Figure 1 also illustrates an example of unauthorized origination of unallocated (reserved) address space 240.18.0.0/20. Currently, 240.0.0.0/8 is reserved for future use [IANA-v4-r]. Similarly, an AS may also falsely originate allocated but currently unused address space. This is referred to as prefix squatting, where someone else’s unused prefix is temporarily announced and used to send spam or for some other malicious purpose."

"The various types of unauthorized prefix originations described above are called prefix hijacks or false origin announcements. The unauthorized announcement of a prefix longer than the legitimate announcement is called a sub-prefix hijack. The consequences of such adverse actions can be serious and include denial-of-service, eavesdropping, misdirection to imposter servers (to steal login credentials or inject malware), or defeat of IP reputation systems to launch spam email. There have been numerous incidents involving prefix hijacks in recent years. There are several commercial services and research projects that track and log anomalies in the global BGP routing system [BGPmon] [ThousandEyes] [BGPStream] [ARTEMIS]. Many of these sites provide detailed forensic analyses of observed attack scenarios."

Misconfigured announcements can be of

The announced routing address space may be

Routing anomalies may be:

"A BGP router can use the ROA information retrieved from an RPKI cache server to mitigate the risk of prefix hijacks and some forms of route leaks in advertised routes. A BGP router would typically receive a validated list of {prefix, maxlength, origin AS} tuples (derived from valid ROAs) from one or more RPKI cache servers. This list may be called a white list. The router makes use of this list with the BGP origin validation (BGP-OV) process depicted in Figure 7 to determine the validation state of an advertised route [RFC6811]. A BGP route is deemed to have a “Valid” origin if the {prefix, origin AS} pair in the advertised route can be corroborated with the list (i.e., the pair is permissible in accordance with at least one ROA; see Figure 7 for the details). A route is considered “Invalid” if there is a mismatch with the list (i.e., AS number does not match, or the prefix length exceeds maxlength; see Figure 7 for additional details). Further, a route is deemed “NotFound” if the prefix announced is not covered by any prefix in the white list (i.e., there is no ROA that contains a prefix that equals or subsumes the announced prefix)." [NIST 800-189 Sec. 4.3]

[Fred Baker, Internet Routing with MANRS, MANRS (n.d.), (”Customers trust that their ISPs and IXPs will connect them to those entities with whom they want to communicate. Routing incidents, such as accepting or propagating a false prefix, are a fundamental service failure in that they connect their customers to someone else.”).]