Initial network information disclosure was straight forward: required tariffs included rates, routes, and terms of service. For example, with telegraph service, a company may disclose that a customer could have an unrepeated message for a cheaper price, but with no liability from the carrier; or the customer could have a repeated message for a higher price and liability on the part of the carrier for accurate transmission. As network technology evolved, so did the customer. The customer changed from simply inserting a message into a network and expecting it to come out the other side - to attaching customer premise equipment (CPE, IMPs, routers, modems) to the telephone network, building virtual overlay networks, and expecting data to come out accurately on the other side. The telephone network afforded only the attachment of hardware (CPE); the Internet evolved the network ecosystem to support the use of higher layer applications and services over a data network; in order to use the service, third parties need disclosure of the characteristics of the network service.

Initially, the Internet was an overlay network, built over the telephone network. The Policy which ensured that computer networks had the resources they needed in order to do cool things was known as the Computer Inquiries. In order for computer companies to build data networks out of telecommunications networks, they needed information. As a result, as part of the Computer Inquiries, the FCC implemented Network Information Disclosure requirements.

The Internet evolved into "Internet Broadband Service" in the 2000s. As the Internet became critical infrastructure in society and the economy, disclosure rules were introduced.

In 2005, Chairman Michael Powell gave have his "Four Freedoms" Speech, including disclosure:

Simply put, such information is necessary to ensure that the market is working. Providers have every right to offer a variety of service tiers with varying bandwidth and feature options. Consumers need to know about these choices as well as whether and how their service plans protect them against spam, spyware and other potential invasions of privacy.

When the Four Freedoms were formally published as the Broadband Policy Statement as part of the Internet over Wireline Facilities Order in August of 2005, the disclosure obligation was not included.

In 2008, Free Press and Public Knowledge alleged that Comcast was blocking the Bittorrent application in violation of the Broadband Policy Statement. Concluding its investigation and finding Comcast at fault, the FCC stated

Although we have not adopted (and we decline to adopt today) general disclosure requirements for the network management practices of providers of broadband Internet access services, the anticompetitive harm perpetuated by discriminatory network management practices is clearly compounded by failing to disclose such practices to consumers. Many consumers experiencing difficulty using only certain applications will not place blame on the broadband Internet access service provider, where it belongs, but rather on the applications themselves, thus further disadvantaging those applications in the marketplace. On the other hand, disclosure of network management practices to consumers in a manner that customers of ordinary intelligence would reasonably understand would enhance the “vibrant and competitive free market . . . for the Internet and interactive computer services” by allowing consumers to compare and contrast competing providers’ practices. [Comcast Order 2008 para. 52]

Not having adopted nor adopting a disclosure rule, the FCC nonetheless concluded, "To the extent that Comcast wishes to employ capacity limits in the future, it should disclose those to customers in clear terms" [Comcast Order 2008 para. 53]

The 2017 Restoring Internet Freedom Order (Pai) rescinded the 2015 Order [RIF para 225], affirmed the 2010 Order [RIF para 215, 229]... mostly, and transferred jurisdiction of enforcement to the Federal Trade Commission. [RIF 209 ("Properly tailored transparency disclosures provide valuable information to the Commission to enable it to meet its statutory obligation to observe the communications marketplace to monitor the introduction of new services and technologies, and to identify and eliminate potential marketplace barriers for the provision of information services. Such disclosures also provide valuable information to other Internet ecosystem participants; transparency substantially reduces the possibility that ISPs will engage in harmful practices, and it incentivizes quick corrective measures by providers if problematic conduct is identified. Appropriate disclosures help consumers make informed choices about their purchase and use of broadband Internet access services. Moreover, clear disclosures improve consumer confidence in ISPs’ practices while providing entrepreneurs and other small businesses the information they may need to innovate and improve products.")]

Any person providing broadband Internet access service shall publicly disclose accurate information regarding the network management practices, performance, and commercial terms of its broadband Internet access services sufficient to enable consumers to make informed choices regarding the purchase and use of such services and entrepreneurs and other small businesses to develop, market, and maintain Internet offerings. Such disclosure shall be made via a publicly available, easily accessible website or through transmittal to the Commission.

Rescinded: The 2015 Open Internet Order (Wheeler) clarified and enhanced the 2010 OI transparency rules. Authority: Title II [OI 2015 para 161 "all of the pieces of  information described in paragraphs 56 and 98 of the Open Internet Order have been required as part of the current transparency rule, and we will continue to require the information as part of our enhanced rule"] [EB Advisory 2016]

A person engaged in the provision of broadband Internet access service shall publicly disclose accurate information regarding the network management practices, performance, and commercial terms of its broadband Internet access services sufficient for consumers to make informed choices regarding use of such services and for content, application, service, and device providers to develop, market, and maintain Internet offerings.

"We expect that effective disclosures will likely include some or all of the following types of information, timely and prominently disclosed in plain language accessible to current and prospective end users and edge providers, the Commission, and third parties who wish to monitor network management practices for potential violations of open Internet principles... We emphasize that this list is not necessarily exhaustive, nor is it a safe harbor-there may be additional information, not included above, that should be disclosed for a particular broadband service to comply with the rule in light of relevant circumstances. Broadband providers should examine their network management practices and current disclosures to determine what additional information, if any, should be disclosed to comply with the rule.: [OI R&O 2010 para 56] [Guidance 2011]

We enhance the rule to require a mechanism for directly notifying end users if their individual use of a network will trigger a network practice, based on their demand prior to a period of congestion, that is likely to have a significant impact on the end user’s use of the service.  The purpose of such notification is to provide the affected end users with sufficient information and time to consider adjusting their usage to avoid application of the practice.

57.  In the Open Internet NPRM , we proposed that broadband providers publicly disclose their practices on their websites and in promotional materials. [181] Most commenters agree that a provider's website is a natural place for end users and edge providers to find disclosures, [182] and several contend that a broadband provider's only obligation should be to post its practices on its website. [183] Others assert that disclosures should also be displayed prominently at the point-of-sale, in bill inserts, and in the service contract. [184] We agree that broadband providers must, at a minimum, prominently display or provide links to disclosures on a publicly available, easily accessible website that is available to current and prospective end users and edge providers as well as to the Commission, and must disclose relevant information at the point of sale. Current end users must be able to easily identify which disclosures apply to their service offering. Broadband providers' online disclosures shall be considered disclosed to the Commission for purposes of monitoring and enforcement. We may require additional disclosures directly to the Commission. [185]

58.  We anticipate that broadband providers may be able to satisfy the transparency rule through a single disclosure, and therefore do not at this time require multiple disclosures targeted at different audiences. [186] We also decline to adopt a specific format for disclosures, and instead require that disclosure be sufficiently clear and accessible to meet the requirements of the rule. [187] We will, however, continue to monitor compliance with this rule, and may require adherence to a particular set of best practices in the future. [188]

"The Open Internet Order requires broadband providers to disclose network management practices, performance characteristics, and commercial terms "at the point of sale." [para 57] ... The Commission [stated] that "broadband providers must, at a minimum, prominently display or provide links to disclosures on a publicly available, easily accessible website that is available to current and prospective end users and edge providers." The Commission further explained in the Order that it anticipated that "broadband providers may be able to satisfy the transparency rule through a single disclosure." Accordingly, we clarify that the Order does not compel  the distribution of disclosure materials in hard copy or extensive training of sales employees to provide the disclosures themselves. Broadband providers can comply with the point-of-sale requirement by, for instance, directing prospective customers at the point of sale, orally and/or prominently in writing, to a web address at which the required disclosures are clearly posted and appropriately updated. The address provided should enable consumers easily to find the disclosures, rather than, for example, leading to a broadband provider's general purpose home page from which the disclosures are not clearly and readily accessible. At brick-and-mortar retail outlets (i.e., not telephone or Internet sales centers), broadband providers that rely on a web page for point-of-sale disclosure should make available equipment, such as a computer, tablet, or smartphone, through which customers can access the disclosures." [Guidance]

2015 OI Rules para 172-175 "Out of an abundance of caution, we grant a temporary exemption for these providers, with the potential for that exemption to become permanent.... Accordingly, we hereby adopt a temporary exemption from the enhancements to the transparency rule for those providers of broadband Internet access service (whether fixed or mobile) with 100,000 or fewer broadband subscribers as per their most recent Form 477, aggregated over all the providers’ affiliates... Accordingly, the exemption we adopt is only temporary.  We delegate to the Consumer & Governmental Affairs Bureau (CGB) the authority to determine whether to maintain the exemption and, if so, the appropriate threshold for it... To be clear, all providers of broadband Internet access service, including small providers, remain subject to the existing transparency rule adopted in 2010.  The temporary exemption adopted today, and any permanent exemption adopted by CGB, applies only to the enhanced disclosures described above. " 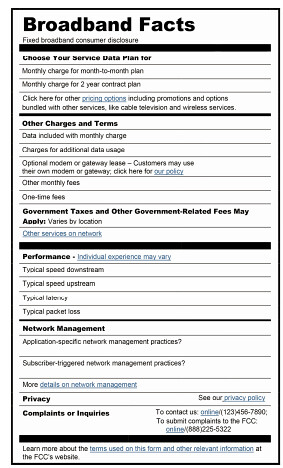 This solution was endorsed by the FCC's NRIC and the IETF. It was also a part of FCC Ch. Powell's Four Freedoms, but was subsequently dropped in FCC Ch. Martin's Broadband Principles. BITAG also recommended disclosures, specifically of "differential treatment." [BITAG (Network operators should disclose information on differential treatment of traffic. p. iv)]

In additional, it has been recommended that a useful endeavor would be to create a baseline of network discriminatory behavior (both good and bad) which exists for such things as network management, security, and network operations.

[FTC Staff Report 2007 p 58: A related concern expressed by some network neutrality proponents is that last mile ISPs might not disclose to end users the ISPs' differential treatment of certain data and that they will be able to get away with such non-disclosure due to a lack of viable competitive alternatives in the marketplace or the difficulty of tracing problems to ISPs' practices. Proponents also suggest that, to the extent that such disclosures are made by ISPs, many end users will not be able to readily understand them, making such disclosures ineffective in checking potential ISP misconduct.262 Some network neutrality proponents also argue that the use of data packet inspection and other traffic analysis technologies by network operators may give rise to privacy concerns that end users might not readily recognize.

Both NSFNET and ARPANet had AUP's which indicated what was and was not appropriate activity over the Net. Standards and protocols are disclosed through RFCs of the Internet Engineering Task Force. See Ports for a list of existing Port-Blocking policies.