Derived From: FCC MBA: "The Measuring Broadband America (MBA) program is an ongoing nationwide performance study of broadband service in the United States that developed out of a recommendation by the National Broadband Plan to improve the availability of information for consumers about their broadband service." [FCC MBA]

"Reports offer results of rigorous broadband performance testing for 13 of the largest wireline broadband providers [AT&T; CenturyLink; Charter Communications; Cincinnati Bell; Comcast; Cox Communications; Frontier Communications Company; Hawaiian Telecom; Hughes Network Systems; Mediacom Communications Corporation; Optimum; Verizon; Windstream Communications] that serve well over 80 percent of the U.S. consumer market. Tests conducted used automated, direct measurements of service delivered to the homes of thousands of volunteers across the United States. The Measuring Fixed Broadband studies began in 2011 with the release of annual reports based on data typically collected during a single month with few large-scale traffic events, such as major holidays, sports events or other elections. The data analyzed in the Reports thus reflect stable network conditions that provide the most accurate view of a provider's performance under controlled conditions. The FCC works in collaboration with SamKnows, an international statistics and analytics firm supporting similar projects in other countries around the world. The Measuring Broadband America program incorporates the latest engineering best practices from these diverse stakeholders to collect and report the most accurate data for consumer broadband performance in the Unites States." [FCC MBA]

"The methodologies and assumptions underlying the measurements described in this Report are reviewed at meetings that are open to all interested parties and documented in public ex parte letters filed in the GN Docket No. 12-264. Policy decisions regarding the MBA program were discussed at these meetings prior to adoption, and involved issues such as inclusion of tiers, test periods, mitigation of operational issues affecting the measurement infrastructure, and terms-of-use notifications to panelists. Participation in the MBA program is open and voluntary. Participants include members of academia, consumer equipment vendors, telecommunications vendors, network service providers, consumer policy groups as well as our contractor for this project, SamKnows." [Eight MBA Report at 20]

"In September 2012, the FCC announced it was expanding the program to include information on mobile broadband service performance in the United States. The program uses the FCC Speed Test app for Android and iPhone devices to test the performance of volunteers' smartphone mobile broadband services. Broadband performance data is being collected that includes upload and download speed, latency and packet loss, as well as the wireless performance characteristics of the broadband connection and the kind of handsets and versions of operating systems tested." [FCC Measuring Mobile Broadband]

"The measurement clients collected data throughout the year. However, only data collected from September 1 through 6 and September 28 through October 21, 2017, referred to throughout this report as the "September 2017" reporting period, were used to generate the charts in this Report. [This data is uploaded from the end user white boxes to samKnows, who then provides the data to the FCC]

"Broadband performance varies with the time of day. At peak hours, more people are attempting to use their broadband Internet connections, giving rise to a greater potential for network congestion and degraded user performance. Unless otherwise stated, this Report focuses on performance during peak usage period, which is defined as weeknights between 7:00 p.m. to 11:00 p.m. local time at the subscriber's location. Focusing on peak usage period provides the most useful information because it demonstrates the performance users can expect when the Internet in their local area is experiencing the highest demand from users. 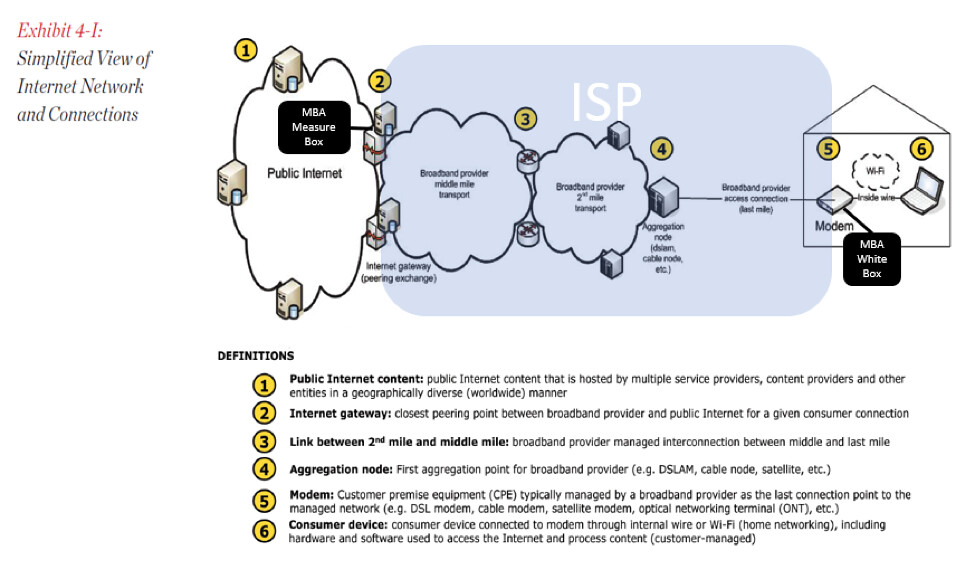 "However, the service performance that a consumer experiences could differ from our measured values for several reasons:

"This Report is based on the following measurement tests:

Sec. 102(3): "Improving Federal data on the deployment and adoption of broadband service will assist in the development of broadband technology across all regions of the Nation."

(1) In general For the purpose of evaluating, on a statistically significant basis, the national characteristics of the use of broadband service capability, the Commission shall conduct and make public periodic surveys of consumers in urban, suburban, and rural areas in the large business, small business, and residential consumer markets to determineâ

(A) the types of technology used to provide the broadband service capability to which consumers subscribe;

(B) the amounts consumers pay per month for such capability;

(C) the actual data transmission speeds of such capability;

(D) the types of applications and services consumers most frequently use in conjunction with such capability;

(E) for consumers who have declined to subscribe to broadband service capability, the reasons given by such consumers for declining such capability;

(F) other sources of broadband service capability which consumers regularly use or on which they rely; and

(G) any other information the Commission deems appropriate for such purpose.

(2) Public availability: The Commission shall make publicly available the results of surveys conducted under this subsection at least once per year.

The data gatherings required by BDIA Sec. 103(c) have been implemented as part of and incorporated into the FCC's Sec. 706 proceedings.

"Capacity is a measure of the total traffic carrying capability of a link or path in a network. The end-to-end capacity is the minimum link capacity along a path. â¦ The capacity is expressed as the amount of traffic the link can carry over a particular time interval (e.g., megabits per second)." [Bauer, Understanding Broadband Speed Measurements, p. 8.]

IP-layer link capacity, "C(L,T,I), to be the maximum number of IP-layer bits that can be transmitted from the source S and correctly received by the destination D over the link L during the interval [T, T+I], divided by I." [RFC 5136 Sec. 2.3.2]

IP-layer path capacity "simply becomes that of the link with the smallest capacity along that path." [RFC 5136 Sec. 2.3.3]

Nominal Physical Link Capacity, "NomCap(L), is the theoretical maximum amount of data that the link L can support. For example, an OC-3 link would be capable of 155.520 Mbit/s. We stress that this is a measurement at the physical layer and not the network IP layer, which we will define separately."" [RFC 5136 Sec. 2.1]

Traffic Capacity: "The maximum traffic per unit of time that a given telecommunications system, subsystem, or device can carry under specified conditions." [FS 1037c]

Throughput (see also Traffic Capacity) "Throughput is the rate at which the traffic can be transported by a specific protocol." [TR-304 Sec. 8.1]. :: "The number of bits, characters, or blocks passing through a data communication system, or portion of that system" [ATIS Telecom Glossary] :: "The maximum rate at which none of the offered frames are dropped by the device." [RFC 1242 Sec. 3.17]

Congestion: A situation where demand for utilization of network resources exceeds capacity of the network, resulting in a degradation of service.

Delay " One-way packet (or frame) delay for a service is defined as the interval between the time that the first bit of a packet ingresses the service at the sending interface and the time that the last bit of the corresponding packet egresses the service at the receiving interface" [TR-304 Sec. 8.2] [ATIS Telecom Glossary] :: "Delay is the time for packets to traverse the network from source to destination. " [Ciavattone]

Host "A computer capable of communicating using the Internet protocols; includes "routers"." [RFC 2330 Sec. 5] :: "Almost any kind of computer, including a centralized mainframe that is a host to its terminals, a server that is host to its clients, or a desktop personal computer (PC) that is host to its peripherals. In network architectures, a client station (userÂs machine) is also considered a host because it is a source of information to the network, in contrast to a device, such as a router or switch, that directs traffic. " - Miles Tracy, Wayne Jansen, Karen Scarfone, Theodore Winograd, Guidelines on Securing Public Web Servers, NIST Special Publication 800-44 ver. 2 at B-1 (Sept. 2007)

Frame Loss Rate " Percentage of frames that should have been forwarded by a network device under steady state (constant) load that were not forwarded due to lack of resources." [RFC 1242 Sec. 3.6]

propagation time of a link "The time, in seconds, required by a single bit to travel from the output port on one Internet host across a single link to another Internet host." [RFC 2330 Sec. 7]

Node "hosts, routers, Ethernet switches, or any other device where the input and output links can have different characteristics" [RFC 5136 Sec. 2.1]

Utilization: Amount of traffic on a network. May be shown as a percentage of capacity or as Mbps. Measured in samples and may be averaged and shown as peak or non-peak utilization, or utilization over certain amounts of time (i.e., hour, day, week, month). :: "The average usage of a link L, Used(L,T,I), is the actual number of IP-layer bits from any source, correctly received over link L during the interval [T, T+I], divided by I." [RFC 5136 Sec. 2.3.4] :: "We express usage as a fraction of the overall IP-layer link capacity. Util(L,T,I) = ( Used(L,T,I) / C(L,T,I) ) Thus, the utilization now represents the fraction of the capacity that is being used and is a value between zero (meaning nothing is used) and one (meaning the link is fully saturated). Multiplying the utilization by 100 yields the percent utilization of the link." [RFC 5136 Sec. 2.3.5]